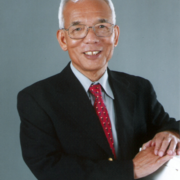 The Syukuro Manabe Climate Research Award is presented to individuals who have made outstanding contributions to the fundamental understanding of Earth’s climate system.

Nominations are considered by a committee of seven members, including the chair of the STAC Climate Variability and Change Committee (CVC), who will lead the committee; three other members of the CVC; and three at-large members selected by the STAC Commissioner, to serve up to three-year terms, to help ensure research across the breadth of Earth’s climate system is represented.  The committee makes a recommendation for final approval by AMS Council.

Syukuro “Suki” Manabe is a meteorologist and climatologist who pioneered the use of computers to simulate global climate change and natural climate variation.

Working at NOAA’s Geophysical Fluid Dynamical Laboratory, first in Washington, DC, and later in Princeton, New Jersey, Manabe worked with director Joseph Smagorinsky to develop a three-dimensional model of the atmosphere with a hydrologic cycle. Manabe used the model to simulate for the first time the response of temperature and precipitation to an increase in atmospheric carbon dioxide.

In 1969, Manabe and Bryan published the first simulation of the climate by a coupled ocean-atmosphere model, in which the general circulation model of the atmosphere was combined with that of the ocean. That work was selected as one of NOAA’s Top Ten Breakthroughs as part of the agency’s 200th anniversary celebration. From the late 1980s to the early 2000s, Manabe’s research group published seminal papers that explored the role of the ocean in climate change, using coupled ocean-atmosphere models.

Manabe is a member of the United States National Academy of Sciences, and a foreign member of the Japan Academy, the Academia Europaea, and the Royal Society of Canada.  He is an Honorary Member of the American Meteorological Society and received its Meisinger Award in 1967, the Second Half Century Award in 1987, and the Rossby Research Medal in 1992.

Manabe has been honored by the first Blue Planet Prize in 1992, the Volvo Environmental Prize in 1997, the Benjamin Franklin Medal in 2015, the BBVA Frontier Knowledge award in 2016, the Crafoord Prize in 2018, and the Nobel Prize in physics in 2021.