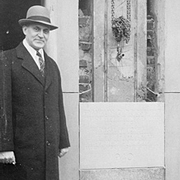 The Francis W. Reichelderfer Award is given in recognition of distinguished contributions to the provision of operational environmental services to the public.

Francis Wilton Reichelderfer presided over a revolutionary era in the history of the National Weather Service.  From 1938-1963, he guided the organization through World War II and brought modern technology to weather forecasting. Reichelderfer’s greatest strengths were in comprehending where meteorology should be going, acting to move in that direction, and then attracting and keeping the talent to make it happen.

Reichelderfer graduated in 1916 from Northwestern University with a degree in chemical engineering and then began a series of career appointments in the US Navy.  During World War I, he became a naval reserve officer in 1916 and was selected for the first class of military personnel for training in meteorology at the Massachusetts Institute of Technology.

Recognizing that understanding the weather was a matter of life and death for the emerging aviation community, he volunteered to become a naval aviator, flying in dirigibles, fixed wing aircraft, and even hot air balloons.  Because of his meteorological and aviation experience, he became Chief of Navy Aerology in 1922 and served in that capacity until 1928.  He worked in a corner of the main Weather Bureau offices in Washington, DC, drawing up maps and comparing actual conditions to official forecasts.

At this time, Reichelderfer became one of the first American meteorologists to espouse the approach of the Bergen School in weather prediction.  This approach relied on physical principles for analyzing weather fronts and air masses and not simply weather observations and measurements.  The Navy assigned Reichelderfer to Bergen, Norway, in 1931 for further studies in air mass and frontal analysis.

Reichelderfer began his tenure as Weather Bureau Chief in December, 1938.  He surrounded himself with scientifically minded individuals such as Carl-Gustaf Rossby, Harry Wexler, and Horace Byers and began pushing the Bureau towards the Bergen methods of forecasting.

He grasped the need for worldwide weather services, helped institute wartime training for hundreds of meteorologists, recruited hundreds of women to replace the men who had entered the armed services, and served on the Joint Meteorological Committee composed of himself and the heads of the Army and Navy weather services.  National leaders now viewed weather forecasting, possibly for the first time, as a worldwide strategic imperative affecting the movements of vast amounts of men and materiel.

Reichelderfer quickly grasped the importance of technological advances and soon pursued radar as a weather observation and forecast tool.  He advanced the study of climatology by overseeing the production of a forty-year series of carefully analyzed surface maps that showed weather patterns dating back to 1899.  During the war years he also established an Air Mass and Frontal Analysis Center, which served as a model for other nations' weather services in the years following the war.  Continuing advances in radar meteorology, the introduction of computerized numerical weather prediction, and the development of a research arm studying such diverse topics as cloud seeding, severe storms, and patterns of radioactive material dispersal were all initiatives pursued by Reichelderfer during the 1950’s.  The establishment of hurricane research programs, the Aircraft Operations Center, the National Severe Storms Laboratory, and the Air Resources Laboratory were additional innovations pioneered by Reichelderfer and the US Weather Bureau.  Arguably, the most significant advance in weather observation, the meteorological satellite, was also introduced during his tenure with the launch of TIROS I on April 1, 1960.

Reichelderfer’s influence transcended national boundaries; he helped form the World Meteorological Organization and served as its first president in 1951.