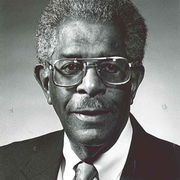 The Charles E. Anderson Award is given to an individual in recognition of outstanding contributions to the promotion of diversity in the atmospheric or related sciences and broader communities through education and community service. The award is in the form of an inscribed wooden book.

Nominations are considered by a committee of no fewer than five members of the Commission for Education and Engagement, which makes a recommendation for final approval by AMS Council.

Born in 1919, Charles Edward Anderson was the first African American to earn a PhD in meteorology. That degree was from the Massachusetts Institute of Technology in 1960.

For his original meteorological training, Dr. Anderson attended the Army Air Forces Meteorological Aviation Cadet Program at the University of Chicago in 1943 and was assigned to the Tuskegee Army Airfield weather detachment.  Anderson served as weather officer at several Army Air Force bases around the US until his release from active duty in 1948.

From 1961-65, Dr. Anderson worked at the Atmospheric Science Branch of Douglas Aircraft Company, California. He served as Director of the Office of Federal Coordination in Meteorology in the Environmental Science Service Administration of the U.S. Department of Commerce, from 1965 to 1966.

Dr. Anderson was a professor in the Department of Marine, Earth and Atmospheric Sciences at North Carolina State University in Raleigh, NC, from 1987 until he retired in 1990. He was a major contributor to a program at the university that has received national recognition for its forecasting of severe storms. In addition to his dissertation for MIT, he did pioneering work in reducing contrails of high-altitude jet aircraft as well as work focused on cloud and aerosol physics and meteorology of other planets.