The Radio Frequency Spectrum and Weather, Water, and Climate: Uses and Challenges 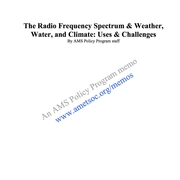 The weather, water, and climate community relies on the radio frequency spectrum for two vital functions: (1) to observe the earth (e.g., with satellites, weather radars, and wind profilers) and (2) to transmit data about the earth system to meteorologists, hydrologists, emergency managers, and other scientists throughout the country. These uses of radio frequencies benefit a wide range of social and economic sectors by supporting operational services that protect life and property and by helping advance scientific understanding of the earth system. The radio frequency spectrum is a limited resource and competition for it is intense and growing, particularly with the rapid expansion of wireless communication. This competition puts weather, water, and climate related uses of the radio spectrum at risk. It will be extremely important for decision makers to understand and account for meteorological uses of radio spectrum that help meet basic human needs before reallocation decisions are made.

Radio frequencies are the portion of the electromagnetic spectrum that spans roughly 3kHz-300GHz. As with all electromagnetic radiation (e.g., visible light, ultraviolet radiation, and x-rays), radio waves travel at the speed of light.

Observations of the earth system are made using ground-based, airborne, and space-based platforms. Radio waves are reflected, absorbed, scattered, refracted, and diffracted by the atmospheric conditions that they encounter, such as clouds and precipitation. Critically, different atmospheric conditions impact radio waves differently. This allows scientists to use radio waves to detect tornados, track hurricanes, and to determine a wide range of meteorological conditions such as atmospheric humidity, cloud types and amounts, wind speeds and direction, and precipitation types and amounts. Radio waves can also determine wave heights in oceans and lakes, storm surge, and ocean currents, among other conditions of the earth system.

Furthermore, determining atmospheric conditions requires the use of specific radio frequencies for which substitution is not possible. For example, only certain wavelengths pass through clouds unimpeded. Often, the same wavelengths are valuable for telecommunications because they can pass through buildings and other obstacles. Spectrum sharing can create additional challenges because receivers and transmitters often use narrow frequency bands and must be able to distinguish among meaningful signals, background noise, and unwanted signals.

In the past few decades, competition for the radio spectrum has increased with the advent and rapid growth of wireless communication. The signals of commercial terrestrial users of spectrum, like cell towers or phones, are often much stronger than the signals being measured or transmitted by the weather, water, and climate communities. This can cause radio frequency interference (RFI) with weather, water, and climate scientific and operational uses of the spectrum, which can degrade signal detection.

In some cases, protective zones placed around critical installations (i.e., areas where commercial users are prohibited from interfering with scientific and operational uses) can accommodate commercial uses of the radio spectrum while maintaining critical Federal operations. However, protected zones are not always adequate to protect Federal users and do not help non-Federal users that are distributed throughout the country and that sit outside the protected zones.

The scientific community uses the radio spectrum in three ways:

The timely and uninterrupted access to weather forecasts, climate information, and ocean conditions that these meteorological uses make possible is central to community preparedness and response to existing hazards and emerging threats.

The radio frequency spectrum is allocated and shared among multiple users, including academic researchers, Federal, state, and local government agencies, and private companies. Several different agencies are responsible for allocating and regulating spectrum: the International Telecommunications Union (ITU), within the U.N., allocates spectrum internationally; domestically, the National Telecommunications and Information Administration (NTIA) manages Federal use of the spectrum; and the Federal Communications Commission (FCC) manages non-Federal use of the spectrum.

The financial benefits to the U.S. economy from freeing up spectrum for commercial use are significant. For example, in 2015 the FCC auctioned off 65 MHz of band segments within 1695-2180 MHz for $44.9 billion. However, the socioeconomic benefits of meteorological uses of spectrum—emergency management and other operational services, and scientific advancement—are central to the success of modern society and must also be accounted for in optimal spectrum management. Critically, virtually every sector of the Nation’s economy is weather-sensitive and the degradation of scientific and operational uses can be expected to have significant financial and safety impacts.

Policy makers face difficult choices in balancing the future needs for radio frequency spectrum against the existing wide range of operational and scientific users in the weather, water, and climate community. It will be extremely important for decision makers to understand and account for the risks to meteorological uses that help meet basic human needs before choices to reallocate radio frequency spectrum are made.