How Trustworthy Are Scientific Assessments of Climate Change? 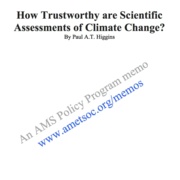 Scientific evidence relating to the climate system and the impact that people might be having on it spans dozens of fields of study and includes work from tens of thousands of individual scientists. The evidence comes from decades of intensive research and is based on observations, field and laboratory experiments, and model simulations.

Over the past few decades, there have been hundreds of independent scientific assessments of this body of evidence. These assessments synthesize scientific research to determine what is known and with what level of confidence. Assessments have examined virtually every aspect of the climate issue, including how the climate system works, what is happening to it, why (the role of natural and human influences), what may happen in the future, what the consequences could be for natural and human systems, and what could be done to manage the risks. Many assessments are scientifically rigorous, produced using transparent processes, and include evaluation of uncertainty and confidence. Efforts to discredit scientific assessments with audiences that are unfamiliar with the underlying science or the processes used in preparing them are a disservice to science and the public.

Assessments of science are most effective when they are relevant to user needs; credible (scientifically rigorous and accurate); and legitimate (produced in a transparent and fair process). Credibility and legitimacy (this memo’s focus) are enhanced when assessments:

Over the past few decades, there have been hundreds of independent scientific assessments of climate change that comprehensively examined relevant evidence, including contradictory findings when they exist. Many of these assessments have been conducted by organizations whose primary objective is scientific accuracy and whose standing would be diminished if they characterized science inaccurately. This is broadly true for assessments conducted by the U.S. National Academy of Sciences, the Intergovernmental Panel on Climate Change (IPCC), the U.S. Government (i.e., the National Climate Assessment), the American Association for the Advancement of Science (AAAS); the American Meteorological Society (AMS), and many others. They involved broad groups of subject matter experts who are familiar with the evidence and included open independent review processes so those who disagree (or wish to add to them) could do so.

Preferences for erring on the side of caution (not alarm), challenges in including outcomes with unknown likelihoods, and desires for universal agreement, cause assessments such as these to underestimate the risk of climate change. Nevertheless, the assessments described above have routinely withstood intense scrutiny, particularly from those who are familiar with the relevant scientific evidence, following public release. They are highly credible. Decision-makers and the public can be confident these assessments are accurate syntheses of the best available scientific understanding. Efforts to discredit rigorous scientific assessments in public venues are not scientifically defensible and do a serious disservice to science and the public.