Options to Reduce the Consequences of Climate Change 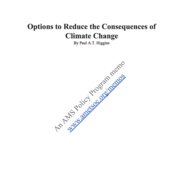 After decades of intensive research, scientists understand a great deal about the climate system and the impact people are having on it. Scientific evidence relating to climate change spans dozens of fields of study and includes work from tens of thousands of scientists. Scientists have rigorously assessed and independently corroborated the evidence hundreds of times, as described in this memo.

Three broad conclusions result from comprehensive assessments of scientific evidence: 1) people are causing climate to change, particularly due to greenhouse gas emissions, 2) human-caused climate change is dangerous and the consequences potentially dire, and 3) we have many options for reducing the consequences of climate change. These conclusions come from multiple lines of evidence.

Options to reduce the consequences of climate change generally fall into four broad categories: 1) mitigation—efforts to reduce greenhouse gas emissions; 2) adaptation—increasing society’s capacity to cope with changes in climate; 3) geoengineering or Earth manipulation—additional, deliberate intervention in the Earth system that tries to counteract some of the impacts of greenhouse gas emissions; and 4) pursuit of additional knowledge—efforts to understand more about the climate system, our impact on it, the consequences, or the response options themselves.

Mitigation reduces our future emissions of greenhouse gases to the atmosphere. This will result in less human disturbance of the climate system--the amount that climate will change because of our emissions--and increases the chances that climate change will be manageable. Approaches to reducing emissions fall into several categories. These include 1) regulation; 2) research, development, and deployment of new technologies; 3) conservation of energy or land; 4) efforts to increase public awareness; 5) positive incentives to encourage choices that lower emissions; and 6) adding a cost for using the atmosphere to dispose of greenhouse gases. This last approach is particularly noteworthy because it is expected to cause a broad-reaching reduction in emissions; it has received a great deal of attention from the research community; and it is a focus of policy discussions. It can also be expected to generate net benefits by correcting a market failure (that emitters currently can use the atmosphere without paying for the cost of climate damage that they cause).

Geoengineering or Earth manipulation, if viable, might help lower greenhouse gas concentrations, counteract the warming influence of greenhouse gases, address specific climate change impacts, or offer desperation strategies in the event we need them. Geoengineering potentially also creates risks because attempts to alter the Earth system could lead to unintended and negative consequences. Two approaches receive the most attention: reflecting sunlight to space to offset greenhouse gas warming and carbon removal (extracting carbon dioxide from the air and storing it deep in the ground or ocean). Carbon removal to match human emissions is not currently possible. Reflecting sunlight would not address all consequences of greenhouse gas emissions (e.g. ocean acidification).

Research, observations, scientific assessment, and technology development can increase understanding of the Earth system, reveal risks or opportunities associated with the climate system, and support decision-making with respect to climate change. Additional knowledge could, in some cases, reveal new opportunities for reducing the consequences of climate change or assist with the early detection of successes and failures. As a result, policies to expand the knowledge base can underpin and support our responses to climate change.

Do we know enough to justify a serious response to climate change or is it better to wait until we know more? This question often comes up in public debates.

We already know a great deal and cannot know everything but we will continue to learn. Waiting to know more reduces the chances that we will do something unnecessary or even harmful. But we already know that climate change is dangerous. Catastrophic climate impacts are possible and become more likely with delay. Some response options have benefits that exceed costs because they correct harmful market failures or would bring valuable side benefits like cleaner air and water. More costly options could be initiated slowly and reversibly then modified over time as we learn more.

Choosing whether and how to respond involves blending information and value judgment. Scientific information helps us understand the climate system, our relationship with it, and our options. Value judgments include questions relating to self-interest, personal preference, risk aversion, fairness, and the relative importance of future generations and other species, among others. Science cannot resolve disagreement over values but science can inform value judgements relating to our potential response.

Finally, these options are not mutually exclusive and none of them alone can fully address the consequences of climate change. Comprehensive responses to climate change almost certainly include a combination of approaches.