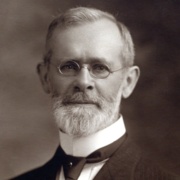 (Prior to 2018, The Cleveland Abbe Award for Distinguished Service to Atmospheric Sciences by an Individual.)

Nominations are considered by the Awards Oversight Committee, which makes a recommendation for final approval by AMS Council.

Cleveland Abbe was a key figure in the first several decades of what is now the National Weather Service (NWS). Among Abbe’s most notable scientific contributions were bridging the two disciplines of astronomy and meteorology and operationalizing the concept of regularly produced weather forecasts based on scientific principles and observations.

Abbe began his professional life as an astronomer and calculator, working at the Coast Survey, the Nicholas Central Observatory in Pulkovo, Russia, the Nautical Almanac office, and the Naval Observatory. Abbe’s interest in meteorology developed while serving as director of the Cincinnati Observatory. He began issuing regular public weather forecasts from the observatory in 1869, drawing on observations received via telegraph and on the scientific understanding of weather features developed by other early researchers.

In 1871, less than a year after the founding of the NWS under the U.S. Signal Service, Abbe joined the agency as a professor of meteorology and civilian assistant. Although occasional reports and storm warnings had been issued earlier, Abbe initiated a national system of tri-daily weather observations, accompanied by synopses and short-term probabilities. He also explored the possibility of longer-range forecasts, which Abbe concluded would require additional hemispheric-scale observations and knowledge of the mechanics of the Earth’s atmosphere. Abbe supervised the agency’s Scientific and Study Division (the “Study Room”) and reached a broad audience through his publications, lectures, translations, editorship of the Monthly Weather Review, and subject editorship of several encyclopedias, including Britannica. He was an advocate for advanced education in meteorology and a proponent of standard time zones. Abbe served as a stabilizing force in the weather service, in part because of his long tenure and his dedication to advancing the science of meteorology and serving the public.

Abbe was active in international scientific and learned societies and received several major awards, including the Symons medal of the Royal Meteorological Society, the Longstreth medal of the Franklin Institute, and the Hartley medal of the National Academy of Sciences (now the NAS Public Welfare Medal).

For more information about Cleveland Abbe, read the Abbe Report, a report on the most probable historical account of his life from the Spring 2022 issue of BAMS.