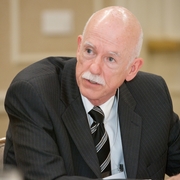 William H. Hooke, senior policy fellow emeritus, served as a senior policy fellow at the American Meteorological Society from 2000-2021. He founded and then directed the AMS Summer Policy Colloquium for 21 years. He was Director of the Policy Program from 2001-2013 and also served as AMS associate executive director.

His policy interests and background include natural disaster reduction; historical precedents as they illuminate present-day policy; and the nature and implications of changing national requirements for weather, water and climate science and services. He has blogged at Living on the Real World since 2010 and authored Living on the Real World: How Thinking and Acting Like Meteorologists Will Help Save the Planet.

From 1967 to 2000, he worked for the National Oceanic and Atmospheric Administration (NOAA) and antecedent agencies, including tenures as Deputy Chief Scientist and Acting Chief Scientist of NOAA, and eighteen months as Senior Scientist in the Office of the Secretary of Commerce.

He has served on several boards and committees of the National Academies of Science, Engineering, and Medicine. These included the advisory committee work that led to the establishment of the United Nations International Decade for Natural Disaster Reduction. In addition, he chaired NASEM’s Disasters Roundtable, 2003-2009 and its Committee on Private-Public Collaboration to Build Community Disaster Resilience, 2009-2010. He co-chaired (with Ann Bostrom), the NASEM Committee on advancing social and behavioral science research and application within the weather enterprise, 2016-2018. He also served on the International Council of Scientific Union’s (ICSU) committee on Integrated Research on Disaster Risk.