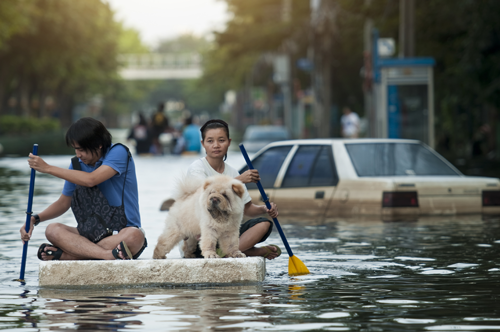 Recent news stories have dramatized the complex and changing relationship between weather and the well-being of life on Earth. Last week, a new study suggested that by the end of this century, the hottest days around the Persian Gulf will exceed the temperature and humidity levels humans can survive without artificial cooling—even in the shade. At the same time, 3 million refugees have fled a civil war in Syria precipitated in part by a persisting drought, and half a million Indonesians have reported haze-induced respiratory illness due to widespread fires as El Niño–warmed weather dries out forests.

The AMS Statement on “One Health” recognizes the common theme of such stories: the health of humans, other animals, and ecosystems is intricately interconnected. Further, the statement reminds us that, “Because weather and climate affect the health and well-being of humans, other animals, and ecosystems, meteorologists and climate scientists bring fundamental knowledge, skills, and experiences that can improve health today and throughout the coming decades.”

A changing climate will alter infectious diseases, air quality, access to water, crop production, seasonal cycles, and animal migration patterns in ways that threaten human health and well-being, particularly for the poor, the elderly, and the young. These factors will motivate even greater integration across scientific disciplines.

Responding will require an approach to health that fuses biological, medical, societal, and environmental sciences with the knowledge and capabilities developed in our weather, water, and climate community. The American Meteorological Society and its membership are finding new areas of collaboration to extend our expertise, experience, and global network to benefit society in new ways.

The Impact of Recent Heat Waves on Human Health in California
Journal of Applied Meteorology and Climatology, January 2014