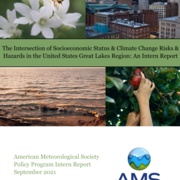 The Great Lakes Region relies heavily on its natural resources, including 21
percent of the world’s (liquid) freshwater, for the majority of its industries, jobs, and
income. Various natural resources have been depleted and threatened by climate
change. The fact that climate change presents a scarcity or change in resources, along
with impacts to other natural processes, causes challenges for all residents throughout
the region, especially for individuals subjected to socioeconomic inequalities.

If the region were a country, it would have the third largest GDP in the world
(this study includes Canada). The region heavily relies on the manufacturing industry,
making up 66 percent of the job force. Shipping, farming, tourism and recreation are
other large industries in the region and each depend on natural resources.

As rapid climate change proceeds, the Great Lakes Region is projected to
experience substantial impacts. A higher air temperature trend was observed in the
region, when compared to the contiguous U.S., and is likely to continue. An increase in
precipitation has already occurred within the region and is more than double the
national average. These impacts strengthen concerns regarding water availability,
warmer lake temperatures, and increased frequency of heat-related deaths. Impacts to
land, water, food, plant, and animal species threaten cultural heritage sites and practices
of indigenous people. All of these issues are coupled with their own subset of additional
challenges, such as warmer lakes supporting an increase of harmful algal blooms
(HABs).

The interactions between socioeconomics and climate change within the region
reveal that alterations in temperature, precipitation, and lake levels all influence the
region’s health, jobs and industries. The biggest threats to public health in the region, as
a result of climate change, include those associated with rising temperatures and
precipitation extremes. For example, weather extremes such as flooding and droughts,
cause issues with infrastructure, water contamination, and water availability for
drinking and other uses.

Many of the region’s main industries directly rely on natural resources and, as
a result, are projected to be greatly affected as a result of climate change. The
agriculture industry will face the economic consequences of rising temperatures, waste,
ozone concentrations, and shifting of the traditional growing season. Conventional
practices of tourism and recreation will alter as the intensity and duration of the seasons
change, including beach closures due to bacterial contamination.

Multiple factors, such as education, political power, and access to resources
contribute to climate vulnerability. These factors determine how impacts from climate
change affect socioeconomic inequality and to what degree of intensity. Residents of
extremely susceptible populations experience challenges both as a result of their low
SES and impacts from climate change. In this circumstance, climate change affects the economy and limits financial capacity to adapt to climate change impacts. Meanwhile,
individuals with a higher SES have the ability to live large carbon footprint lives and
therefore make greater contributions to emissions. The same group of higher SES
individuals have a higher capacity to be more politically active and garner influence to
produce more effective change than those individuals with a lower SES. As a result, it is
more likely that higher SES individuals are able to skew policies to their advantage.

This study can inform future action that considers environmental justice in
efforts to mitigate climate change risks and hazards. This can be done by: 1) initially
supporting disadvantaged populations so systems do not benefit from their
disadvantage, 2) directly fighting climate change by addressing climate risks and
hazards at the source, or 3) providing additional and effective resources to prevent and
mitigate the effects of climate change.

Significant obstacles, such as low socioeconomic factors and the impacts of
climate change are difficult alone, however, many populations experience these
challenges interacting to exacerbate each other. Financial resources, public awareness
and concern, as well as collaboration between policymakers, scientists, and the general
public must be strengthened to promote creative and urgent solutions. These solutions
must consider vulnerable populations within the region which could potentially act as a
model to other regions. If available research is utilized effectively, and the reduction of
socioeconomic inequalities as well as climate change impacts are prioritized, the region
will be better poised to experience success in economic, social, and environmental
sectors. For example, the economy may be strengthened and biological systems and the
natural resources they provide may be stabilized. Other regions of the country that
struggle with similar issues of socioeconomic inequality and vulnerabilities to climate
change risks and hazards, could potentially use the Great Lakes Region as a reference to
combat these difficult problems.