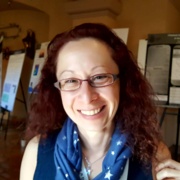 As executive director of the American Association of Variable Star Observers (AAVSO), a non- profit worldwide scientific and educational organization of amateur and professional astronomers, Stella Kafka utilized a combination of talent, skills, and scientific accomplishments that she now brings to her new role as AMS executive director.

Kafka obtained her B.S. degree in physics at the University of Athens, Greece, and a master’s and Ph.D. in astronomy, with a double minor in physics and geophysical sciences from Indiana University in Bloomington, Indiana. There she received the Hollis and Grete Johnson Award for Excellence in Graduate Student Research. After completing her Ph.D., Stella held a series of prestigious postdoctoral positions and fellowships, first at the Cerro Tololo Inter-American Observatory in Chile, where she received the National Optical Astronomy Observatory Excellence Award, then at IPAC/Caltech, and finally as a NASA Astrobiology Institute Fellow at the Carnegie Institution of Washington.

Stella also brings with her a wealth of managerial experience. In addition to serving as the director of two research and mentorship programs for undergraduates while in Chile, Stella managed editorial, marketing, financial, business development, operations, and production aspects of journals at the American Institute of Physics (AIP). As a journal manager at AIP, Stella successfully oversaw the launch of a new journal and served as a liaison between publishing and research communities.

On top of her research and management abilities, Stella brings an international perspective to her work. After growing up in Greece, she obtained a Proficiency Diploma in the French language (she has one in English, too), pursued higher education in the United States, and worked and traveled in South America (including Chile, Argentina, and Brazil). Stella is fluent in Greek and English and speaks Spanish and French.

Stella enjoys interacting with people of every age and background and has honed her communication skills through mentoring students, classroom teaching, and lectures to professional and public audiences. And then, like all good communicators, she knows when to stop and listen.