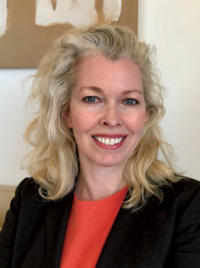 AMS has already made considerable progress in the holistic representation of weather, water, and climate disciplines and in highlighting the impacts of extreme events. If elected, I would work to build on AMS’s demonstrated success in advancing science, technology and policy in these areas. I would advocate for expanding the engagement on these crucial topics within and beyond AMS, for instance by enhancing both scientific and public-facing fora and communications. I would motivate and support collaborative prediction and observing efforts to address the unprecedented planetary challenges of climate change. Relatedly, AMS plays a vital role in developing leaders who will navigate through an uncertain future. I think it is essential to elevate and embrace the diversity of voices of early-career scientists and students and to create more opportunities for them to participate in AMS governance and events. The private sector plays an important role in the ecosystem through research, collaboration, and the provision of services of added value. The private sector is an important part of AMS membership and exhibits strong participation. I would aim to enhance the contributions of the private sector in supporting AMS initiatives, particularly in outreach and education. Sustained programs such as the AMS Summer Policy Colloquium prepare early-career scientists to lead in public, private, and academic environments. I would make it a goal to expand the philanthropic and private-sector support for these programs, thereby increasing their reach and strengthening our collective ability to address the many challenges of a vastly disrupted planet.

Julie Pullen is director of product at Jupiter Intelligence, a start-up delivering hyper-local projections of weather, water, and climate using cloud computing. Dr. Pullen’s expertise spans climate, weather, and hydroscience with a particular focus on high-resolution coastal urban prediction for flooding, heatwaves, and other perils. She is an adjunct research scientist at Columbia’s Lamont-Doherty Earth Observatory. Previously, Dr. Pullen was associate professor in civil, environmental, and ocean engineering at Stevens Institute of Technology (with a joint appointment in the Environmental & Climate Sciences Department of Brookhaven National Laboratory), where she led international multidisciplinary teams in integrated oceanography, meteorology, and urban field and modeling studies. There she also headed the DHS-funded National Center for Maritime Security (2012–15). Dr. Pullen currently serves on the Steering Committee of the AMS Commission on the Weather, Water, and Climate Enterprise, and she chaired the Coastal Environments Committee (2005–07). She was the elected physical oceanography councilor for The Oceanography Society (2015–18). Dr. Pullen was a member of the National Academies committee to review the Fourth National Climate Assessment (NCA4): Impacts and was a member of the 2014–16 National Academies committee on Earth System Prediction. Dr. Pullen is a board member of the Waterfront Alliance, a civic organization representing over 1,000 groups with a stake in the NY/NJ waterfront, and is cochair of the policy committee. She was a chapter coauthor of the 2015 New York City Panel on Climate Change (NPCC2) report. Dr. Pullen holds a master’s degree in applied mathematics from the University of Arizona and a Ph.D. in physical oceanography from Oregon State University. She was a 2018 Fulbright Scholar (Philippines), is a Fellow of the Explorers Club, and was a science fellow at Stanford’s Center for International Security and Cooperation and a Marie Tharp Visiting Fellow at Columbia. As a scientist at the Naval Research Laboratory, she pioneered the coupling of models of the ocean and atmosphere.