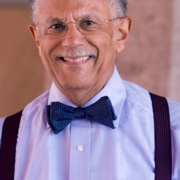 The Warren Washington Research and Leadership Medal is presented to individuals who are recognized for the combination of highly significant research and distinguished scientific leadership in the atmospheric and related sciences.

Washington became one of the first developers of groundbreaking atmospheric computer models in collaboration with Akira Kasahara when he came to the National Center for Atmospheric Research (NCAR) in the early 1960s. These computer models, which use fundamental laws of physics to predict future states of the atmosphere, have helped scientists understand climate change. As his research progressed, Washington worked to incorporate additional aspects of the climate system into models, including the oceans and sea ice.

Washington, a senior scientist at NCAR, has engaged in research for over 50 years and has given advice, testimony, and lectures on global climate change.  An Introduction to Three-Dimensional Climate Modeling, written by Washington and Claire Parkinson, is a standard reference in the field.

In 2010, Washington was awarded the National Medal of Science by President Barack Obama, the nation's highest science award "for his development and use of global climate models to understand climate and explain the role of human activities and natural processes in the Earth's climate system and for his work to support a diverse science and engineering workforce."

As the second African-American to earn a doctorate in the atmospheric sciences, Washington has served as a role model for generations of young researchers from many backgrounds. He has mentored dozens of graduate and undergraduate students. In 1999, he won the Dr. Charles Anderson Award from the American Meteorological Society "for pioneering efforts as a mentor and passionate support of individuals, educational programs, and outreach initiatives designed to foster a diverse population of atmospheric scientists."