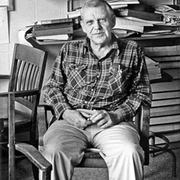 The Henry Stommel Research Medal is granted to researchers in recognition of outstanding contributions to the advancement of the understanding of the dynamics and physics of the ocean. It represents the highest award the Society can bestow upon an oceanographer.

Nominations are considered by the Oceanographic Research Awards Committee, which makes a recommendation for final approval by AMS Council.

Stommel received his BS from Yale University in 1942 and served there as an instructor in mathematics and astronomy from 1942-44.  From 1944 to 1959, Stommel was a research associate at the Woods Hole Oceanographic Institution.  He became professor of oceanography at Harvard University in 1959 and moved to the Massachusetts Institute of Technology in 1963, where he remained until 1978, returning to Woods Hole until his retirement.  Stommel established the PANULIRUS station (begun in 1954) in Bermuda.  He was elected to the National Academy of Sciences in 1962 and received the National Medal of Science in 1989.

Together with Arnold Arons, Stommel proposed a theory of a global ocean current circulation in which surface water sinks in the polar regions to feed the deep boundary currents on the western sides of basins, while the interior flow actually moves towards the pole.  This work, based on laboratory studies, predated the discovery of such boundary currents, and remains one of the great achievements in theoretical physical oceanography.  Stommel also developed early models of the thermohaline circulation which suggested that it might have more than one stable state.

In addition to his work on large-scale ocean currents, Stommel did research on a variety of problems in oceanography and meteorology.  These include work on the classification of estuaries, estimates of turbulent diffusion, and studies of the impact of volcanoes on climate.