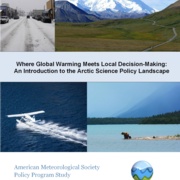 The Arctic is one of the fastest warming places on Earth. The consequences of this warming are already felt locally and globally and are expected to intensify over the next few decades. As a result, there is great need for scientists to inform the many policy decisions related to weather, water, and climate (WWC) in the Arctic.

The Arctic has been of enormous interest to scientists and politicians for hundreds or thousands of years because it is home to many Indigenous people, contains unique ecosystems, is rich in natural resources, and is not governed by any one country. Scientifically, the Arctic combines many disciplines of the Earth sciences. Despite the diversity of disciplines, we find a cohesion across international boundaries and fields of expertise that justifies and explains the term “Arctic science”. Politically, the Arctic is characterized by international collaboration and a large proportion of Indigenous people. However, conflicting views on economic development and environmental protection have led to increasing tension among Arctic stakeholders, and have often been at the center of disputes between federal and local policymakers.

This study aims to 1) give an overview of the most prominent organizations involved in Arctic science policy, 2) introduce the most discussed policy issues in the Arctic and how they connect to weather, water, and climate science, and 3) discuss how scientists and policymakers can collaborate with Indigenous peoples to achieve outcomes that better align with interests at all levels of decision making from international to individual communities. This study is based on over 30 virtually conducted interviews with experts and a one-and-a-half-day virtual workshop held on 21–22 July 2021 with about 30 participants and prominent experts, most notably Meredith Rubin (U.S. State Department), David Kennedy (U.S. Arctic Research Commission), and Julie Raymond?Yakoubian (Kawerak).

We find a rich science policy landscape centered on Arctic issues with organizations focused on Arctic science, Arctic policy, and their interactions. At the international level, political issues are most prominently discussed at the Arctic Council meetings. Much of the science coordination occurs within the working groups of the Arctic Council. Only the eight Arctic countries are full members of the Council, leaving Indigenous groups and non-Arctic countries with observing status. Nonetheless, countries tend to engage in more collaboration on Arctic issues compared to many other regions and issues—in particular the United States and Russia. Federally, the number of organizations involved in Arctic science policy reflects the diversity of scientific disciplines and the political issues related to the Arctic. Two organizations stand out in coordinating the U.S. science policy in the Arctic: the U.S. Arctic Research Commission, which reports to the White House Office of Science and Technology Policy, and the Interagency Arctic Research Policy Committee (IARPC), which coordinates the Arctic science policy activities of 16 agencies and departments. There are even more organizations that work at the state and local level and as non-governmental bodies. Most importantly, Indigenous people in the U.S. Arctic are organized in corporations that are often involved in research, applied science, and science policy. In our research the Ukpea?vik Iñupiat Corporation and Kawerak were often mentioned as particularly involved in these activities.

The concern that Arctic scientists, regardless of discipline, mentioned most is the lack of observations. The combination of extreme climate conditions with the remote nature of much of the Arctic requires special equipment and makes maintenance difficult. Consequently, in situ observations of the Arctic are sparse and expensive. Satellites are the backbone of much of Arctic research, but they have limits in terms of the type of variables they can observe and depend on ground observations for calibration.

Scientists agree that the most significant progress has been made in the scientific understanding and modelling of sea ice. Improving our understanding of permafrost is identified as the most critical gap in any one discipline. Furthermore, there is significant uncertainty about the effect of Arctic change outside the Arctic, particularly the global ocean circulation and storm patterns in the Northern Hemisphere. Inter- and transdisciplinary work plays a key role to take full advantage of the progress in individual disciplines and to improve our understanding and predictions of the Arctic as a whole. These results will need to be tied together with social sciences and Indigenous knowledge to best inform policy decisions and improve lives in the Arctic and around the world.

The policy issues in the Arctic range from national security and international shipping routes to climate adaptation and natural resources management at the local level. Policy makers need to balance these often-competing interests carefully. As many industries and lifestyles in the Arctic are centered on the use of nature, many political issues can be informed by weather, water, and climate science. For example, all shipping-related issues rely on our understanding of sea ice, sea level, marine weather patterns, tides, and often marine biology. On land, weather, water, and climate science affect transportation, mining, flora, and fauna. Nearly every policy decision in the Arctic is affected by the rapid changes caused by global warming, changes in biodiversity, and land use (often summarized as global change).

Policy decisions also affect what kind of Arctic science is funded, how it is conducted, and who is most likely to benefit from it. This is particularly important in the Arctic where Indigenous groups have historically been underrepresented in the decision?making process. We find a scientific community that is generally aware of this history and willing to improve their processes. However, it is also apparent that few scientists are trained in co-producing knowledge with Indigenous peoples and that many scientific processes are still limiting instead of enabling collaborations between Western scientists and Indigenous knowledge holders. For example, funding requirements can limit the time scientists spend in the field to build the necessary relationships or require university degrees to apply for funding. Furthermore, investments in infrastructure are needed to ensure research is not overwhelming the capacity of smaller communities in the Arctic.

In summary, we find: Arctic science is a well-defined term tying together many disciplines through the socio-environmental similarities across the region.