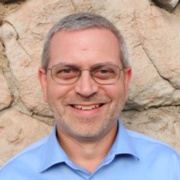 Please include details about your educational background and what sparked your interest in atmospheric or related sciences.

I have a bachelor’s degree in Meteorology from Millersville University and a master's degree in Atmospheric Science from SUNY-Albany. However, my interest in meteorology started in grade school. I grew up outside of Pittsburgh and there was a great team of local TV forecasters, including Joe DeNardo. Back in the 1970s and 1980s, Joe would make the forecast understandable to everyone. He drew me in with his explanations and made me want to learn more about the weather. At the same time, I was becoming interested in computer programming. Except for a few small programs during high school to process data, I did not seriously consider combining the two areas. While I was at Millersville, the department began using an advanced computer system to receive and process data. The students used this system to produce our forecasts for class, for a weather phone line, and for a local radio station. My forecasts were okay, but I was more interested in the computer and the programs used to process the data. At SUNY-Albany, I used the GEMPAK software to create graphics for my master’s thesis. The base functionality was okay, but I found that I needed to modify some of the programs to get the output I wanted. This was when I really saw the possibilities for combining meteorology and programming.

What was your first job in the field and how did you end up in the job you are in now?

My first job was at NASA Goddard in 1991, working on the GEMPAK software. GEMPAK is a set of applications that allow the user to interpret, store, and display meteorological data such as model grids and observations. At NASA, GEMPAK was used by researchers with mostly static data sets. I learned more about the inner workings of GEMPAK and how to work with the programming team and the scientists at NASA. After 8 months at NASA, I moved to the National Weather Service to continue work on GEMPAK and apply it to the problem of real-time data and operational forecasting. We successfully transitioned GEMPAK into the NAWIPS package for the National Centers to use as their primary forecasting tool. I worked on the framework of GEMPAK, creating application interfaces for the user interface programmers to call to manipulate the meteorological data. These programs with graphical interfaces became the basis for NAWIPS. Eventually, I did a bit less programming and more software designing and reviewing other team members’ work and became the NAWIPS system architect. I spent a brief stint leading a different type of project, where I learned more about Project Management and managing people. At the beginning of 2017, I moved to NWS headquarters to be the System Architect for AWIPS and continue to fulfill that role. It is a balance of technical activities, contract management, and personal interactions.

What opportunities did you pursue that you knew would be beneficial to securing a job in the profession?

I am not sure that I had a plan before or during my career. Looking back, I see that I did things that interested me. At first, I thought I would be a forecaster, so I went to college to gain the knowledge necessary to do that. I found that I was a mediocre forecaster. Then I thought I might go into academics and research. I found that I enjoyed collecting and processing the data, but not really producing the final paper or presentation. The one opportunity that presented itself was the option to work on GEMPAK with the team who developed it. A random discussion with a professor at SUNY-Albany led to me connecting with people at the NWS and NASA who recommended going to NASA to continue working on GEMPAK. My move to the NWS was almost as random. We were collaborating between NASA and the NWS and the lead developer at the NWS mentioned that they had a new position opening on the contract team. I jumped at the opportunity. Throughout my career, I have been on a quest for anything that would help me be a better programmer and leader.

What other courses/skills beyond the required math and science courses do you think would be the most helpful to individuals wanting a career in your profession?

I have taken a few courses on specific programming languages—FORTRAN, C, Python, Java. I have also taken courses on Project Management and Team Management. At this point, I wish I had taken some courses on contract management and law. It was easy to see a need for the scientific and technical side of the equation. The skills necessary to manage the people side of the equation were less obvious at the time. After taking the initial course on Project Management, after I began working, I thought about how it would have been better to gain that knowledge and experience earlier.

What is your typical day on the job like?

At this point in my career, my typical day is inundated with meetings. Some of them are technical where we discuss the approach to solving a particular problem. Most are about contract, personnel, project, and schedule management. A portion of the work is accomplished over email or document review comments, but we still need to meet to reach a conclusion and make decisions. The time left from all the meetings is spent writing and reading documents. I review code designs from the programming staff. I am involved in reviewing documents from the contract team on their tasks and schedule. I have to understand the hardware that our software will use and review the options for future purchases. I review proposals for the NWS communications networks and data distribution. I look at new data sources and how to acquire, move, process, and display the data. Recently, I have been leading a team on how to move AWIPS development, testing and training to a Cloud environment. So, having meetings and working on documents is the typical part, the content varies from day to day.

Solving new problems is the best thing about my job. New problems present an opportunity to apply my knowledge and experience to form a new solution. I like to look at problems in different ways to find the best approach to fix an issue or extend the system to meet a new requirement. Working with a great team toward a solution that will benefit the NWS forecasters and allow them to do their jobs properly and efficiently is very satisfying. The challenge is not to become bored with the methods of finding solutions and to focus on the output and whether it will be useful for the users. The seemingly endless meetings can be draining. The document reviews are never finished. The goal is to have a system that helps the NWS forecasters fulfill their mission to save life and property.

Does your job allow for a good work/life balance? If not, why?

Yes, it does now. I used to spend hours writing and testing code, sometimes working past midnight. While this was fun, it made less time to enjoy things with my wife and friends. I made an effort to change and now very rarely do any work in the evenings. I joined a bowling league for the winter and a golf league for the summer. My wife and I started cooking at home more. I found that having other things to do has allowed me to be more productive during work hours. Knowing that I have to leave it behind when I am done for the day gives an urgency to getting everything finished completely and efficiently.

Over the course of your career what is the most exciting thing that has happened to you?

The most exciting thing is not one thing but a series of events. I have been fortunate to travel to many locations to speak about NAWIPS and AWIPS. I have attended seventeen AMS Annual Meetings since 1994. I have been to many NOAA/NWS facilities in the contiguous United States, Alaska, Hawai’i, and Puerto Rico. One trip stands out. In 2009, I went to the European Centre for Medium-Range Weather Forecasting for the 12th Workshop on Meteorological Operational Systems. At the workshop, I presented on the initial plans and activities on merging NAWIPS functionality into the AWIPS system. I also met many people from around the world doing similar work with data visualization. I have kept in contact with a few of them over the years.

Is there anything you wish you had done differently in your career?

No. I think that all of my decisions have led me to a great job, with great co-workers and with a great purpose. I believe that everything you do is for a reason. There is no room for second guesses or regrets. It is much more important to tackle the current problem and to plan ahead to address future problems that may occur.

What are some “must haves’’ on a resume if a person wants to gain employment in your field?

I cannot point to any one thing that is required. I look for a general sense that the person is well-rounded. They need to show interest in something besides the weather or programming. For someone fresh out of college, this may be shown in extracurricular activities (sports, clubs, community engagement, etc.) or a particular interest in coursework outside of their major (literature, music, etc.).