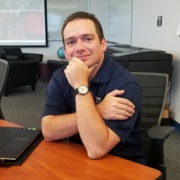 Please describe your educational background and what sparked your interest in atmospheric or related sciences.

What sparked my interest in the field of atmospheric sciences began when I was a young boy by witnessing tornado damage for the first time. Two weeks later, I would watch the movie Twister and a documentary on severe weather and I was hooked! I would then spend my entire childhood researching severe weather through my grandparent's encyclopedia, watching Discovery Channel's Raging Planet TV show, and developing a replica of a dropsonde that the Hurricane Hunters used for my high school senior project.

After getting out of the United States Navy (USN), I will start my undergraduate in atmospheric sciences and complete it in December 2019 from Embry-Riddle Aeronautical University, finishing four papers, three of which were published, and maintaining a respectable GPA for all the work that I could do.

What was your first job in the field and how did you end up in the job you are in now?

When I graduated high school, I joined the USN at the age of 19 years old. Originally, I went in as a hospital corpsman but didn't make it through training—however, while speaking with a career counselor, he pointed out certain jobs that I qualified for and an Aerographer's Mate (AG) was available. This position is a weather forecaster/observer, and not even a second later I grabbed the last seat and was set for training two weeks later.

By July of 2008, I finished training and was off to my first command. I would then spend the next 8 years in service forecasting weather for various of regions protecting millions of dollars worth of equipment and personnel. Currently, I am a Pathways Student Intern in the National Weather Service waiting to see if I will move onto graduate school or go operationally.

What opportunities did you pursue that you knew would be beneficial to securing a job in the profession?

While servicing in the USN, I would pursue and accomplish over 25 training programs only specific to my job. I would also get qualified through the Department of Labor as a Professional Weather Observer Journeyman, which took over 3,000 hours to achieve. To help further my career, I purposely sought out additional training as a forecaster shortly after checking into my first command, and I was allowed to forecast the weather for the entire SE region of the United States of America only as a junior forecaster, which is commonly held by more senior-level personnel. While servicing, I also pursued college classes during my eight years to get me closer to receiving my undergraduate.

During my undergraduate, I worked on various research projects, which led to 3 published articles and 1 extended abstract while maintaining a respectable GPA. However, I treat myself not as a Veteran but someone that has something to prove. Upon hearing the National Weather Service released various Pathways positions, I applied for as many as I could and was lucky enough to get an offer.

What other courses/skills beyond the required math and science courses do you think would be the most helpful to individuals wanting a career in your profession?

I think the most helpful courses and/or skills for those who are seeking a career in my profession is Geographic Information Systems (GIS), computing skills (i.e. Python, JAVA, Linux/Gempak), being creative, and strong writing or communication skills. GIS enables an individual to develop maps, including three-dimensional maps, which are an excellent communication tool. Imagine developing radar archive loops overlaid over a three-dimensional map of Oklahoma City to see how man-made features change atmospheric conditions. This brings me to my second point.

Creativity can lead to new theories that weren't thought of before. My first extended abstract described tropical cyclones producing microbursts. Writing four papers outside my humanities not only encouraged me but it increased my skills, which can easily be used later on in my career. However, writing skills, developing maps, and being creative are useless without strong communication skills. If you are nervous presenting (which is perfectly normal), I suggest holding something small in your hands and clutching onto it. This will allow you to relax and focus on your notes during the presentation, but make sure you practice before the presentation.

What is your typical day on the job like?

A typical day in the USN was 12 hours on and off while on a ship depending on whether we were in port or not—however, during shore base commands can vary. My very first command was a standard two weeks day and vice versa while only working 15 days out of the entire month. Every day coming into work, we had a standard turnover, and depending on whether we had to perform other duties (i.e., medical or personal) we were there at the command studying for qualifications, providing briefs for the upper chain of command, and working. However, during your time in the military, no one is not training for something. If you can't find something to do, the chain of command will find something for you unless you've exhausted every possible outcome.

The most challenging thing about my job in the military was separation from family. A lot of people are afraid of moving away from home because they want to be close to their families as a safety net, which is completely understandable. However, one cannot grow without sacrifices because you cannot learn what strengths or weaknesses you have. Even though you say you know them, I promise you, you have more than you realize. I for one learned over a variety of activities (i.e., dancing, working out, social skills, theme parks)—normally I had been scared to death of performing.

The one thing that I like the most about my job is the constant challenge. Everyday, during working hours or not, my friends and colleagues from work would perform a variety of workout contests to see who would win, which ultimately built friendships and brotherhood. This also taught me more leadership qualities. One other thing that I loved was the ability to travel. My family has always lived in Florida, so after eight years of military and nearly four years of undergraduate studies, I have seen half of this world. I personally have driven through the entire southern states of the U.S. and I have seen the tallest building in the world in Abu Dhabi. It's an amazing adventure of hard work with great benefits.

Does your job allow for a good work/life balance? If not, why?

Being in the military isn't just defending your country—it does allow you to develop friendships, brother or sisterhood, and yes, family. When protecting that American flag, the man or woman standing next to you could very well potentially save or boost your career and even your life depending on the circumstances. However, with all great work you must find a balance of having fun while being safe. Going to see the sights and experiencing new foods teaches you something and allows you to grow into someone you never knew existed. My time in the USN allowed me to make friends that I know to this day will have my back and will encourage me. When you go see new places and break out of that shell so to speak, you become stronger as a person allowing you to think you can take on anything the world can throw at you. My second home is my first command in Virginia because it's where I chose to grow as a leader, motivate others when their morale was down, and experience life at its fullest. You get to choose what life you want and who you want to spend it with, so choose wisely because there are those who will slow you down and those who will pick you up.

Over the course of your career what is the most exciting thing that has happened to you?

The most exciting thing that happened to me during my career is a tough choice. However, shortly after I took over the southeast region, I came into work and noted how the water vapor satellite revealed a cold front had pushed off the coast of Florida during summer. A pilot was taking off from Jacksonville and was heading to the Bahamas around the time of max heating. Any good forecaster would know that these are prime ingredients for thunderstorms to develop. The previous forecaster did not brief that pilot of weather limitations, so I took the liberty of updating the pilot of the dangers he was flying into.

This would later pay off as his aircraft got struck by lightning during flight enabling the pilot to reach safety. The following day, I would be greeted by my Leading Chief Petty Officer and the Command Master Chief with high appraisal on an amazing forecast. However, the most memorable moment during my career happened on my ship. It was my time to leave the repair locker (battle station position), so I had asked my team whether they wanted me to leave or not, and they all said no due to how I led them and motivated them. Leading oneself is tough, leading others is an achievement in itself.

Is there anything you wish you had done differently in your career?

During my time in the military, all personnel (i.e. officers and enlisted) are required to get some kind of warfare qualification. If there is anything that I wish I could have done differently in my career, it would be the speed it took me to achieve my pins. These warfare pins are probably the toughest challenge any sailor, airman, infantryman (i.e. Marine and Army) can get because they also define one's career down the road. My advice for those who are entering the military is to knock out these kinds of qualifications more not to just benefit the military but to benefit themselves so they can move onto other career moves.

What are some "must haves" on a resume if a person wants to gain employment in your field?

Entering the military one thing ALL personnel should have is leadership, GPA, and volunteering. Volunteering goes hand in hand with leadership. If one is going into the officer corps, both of these qualities can greatly change one person's mind between a job you want and a job they need filling. Leadership skills come from being a representative of a club (i.e. President and etc.) and/or coaching. Volunteering is especially valuable because it shows you are prepared to make sacrifices. Everyone in college makes sacrifices, but in the military you have to make more sacrifices than you ever thought possible. The military will bring out the best of people no matter what one says about themselves.