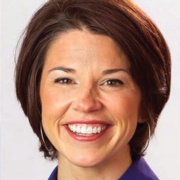 My story is not the same as many meteorologists.

I grew up in Pennsylvania and went to Penn State. However, I didn’t choose Penn State for the amazing meteorology program, as most do. I always loved weather, but never saw it as a career before college. Long story (that involves another love, gymnastics) short, I went there because it was in state. Little did I know, that decision would set me on this path—a fulfilling career fostered by the inspiration, learning, and community of the American Meteorological Society.

Most of us in the weather, water, and climate enterprise are driven by a desire to keep people safe. That safety has been challenged in a major way this past year. Even though COVID was the main reason, it wasn’t the only one. There were a record number of billion-dollar weather and climate disasters, with compounding disasters, exacerbating health, economic, and equity issues. These are the same challenges facing AMS—how to keep people safe, all people.

The lessons learned from this incredibly challenging year can be applied to our work. First, science matters. Strong scientific decision-making matters. Second, we are a global community. Even if you experience weather locally, it’s part of something bigger and more connected. And third, underrepresented and minority communities are disproportionately impacted.

At a time when the world is changing so rapidly—from society and the ways we interact, to technology, our climate, and how we consume media—there is also great opportunity. An opportunity to rethink systems and rework practices.

There will always be a need for strong science, scientists, and communication. Through this focus, we can support an even stronger AMS and a safer world.

Bernadette Woods Placky is the chief meteorologist and Climate Matters director at Climate Central, a nonprofit research and communication organization. Climate Matters works with a network of more than 1,800 U.S. TV meteorologists and journalists, helping them to make climate change immediate, local, and relevant for their audiences through education, content creation, and network support. She also works with a global group of TV weather presenters.

Woods Placky graduated from Penn State University in 1999 with a B.S. in meteorology and a minor in French, including a semester studying abroad. She began her career at AccuWeather before making the switch to broadcast television. Her first TV station was in Fayetteville, Arkansas, then she moved to Lexington, Kentucky, and eventually Baltimore, Maryland, where she was the first female meteorologist in the station’s history. This is also where she won an Emmy for Best Weathercaster and helped launch Weather Day at Camden Yards for area students. Woods Placky earned both the AMS Seal of Approval and the Certified Broadcast Meteorologist distinction.

In 2013, Woods Placky made the transition to Climate Central in Princeton, New Jersey. During her time there, she has given numerous presentations and hosted many workshops around the world, including at COP 21 in Paris.

Woods Placky has served on several AMS committees and task forces, and hosted several short courses. In addition to her work with AMS, she is deeply engaged in her alma mater, Penn State. She helped launch the Meteorology Alumni of Penn State group, served on the Graduates of Earth and Mineral Sciences Board, has been active in the Mentoring Program, and is the chair of the Meteorology and Atmospheric Science Department Advisory Board. Woods Placky is also very active in her local community, serving on the board of trustees for the Watershed Institute and as a science advisor for C-Change Conversations.