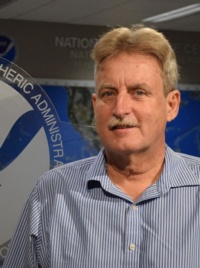 The AMS membership spans a range of sub-disciplines, from theoretical research to broadcasting. Rapid changes in technology, work environments and new services required of operational meteorologists are presenting a number of challenges that the AMS can help address. The National Hurricane Center (NHC) is an interface between many parts of the weather enterprise. In addition to a being an operational forecast center, NHC interacts with the research community through the Joint Hurricane Testbed, works with social scientists to develop better public-facing products, and provides meteorological guidance to external users, including the media, emergency managers and the general public. My experience working at NHC and two other NOAA offices (the Office of Atmospheric Research, the Satellite and Information Service) and as an academic faculty member in my early career provide a perspective that will be useful for guiding the AMS assist with the upcoming challenges facing the meteorological community.

The National Weather Service (NWS) is shifting its emphasis from deterministic forecasting to providing Impact-based Decision Support Services (IDSS) to stakeholders based on probabilistic forecast guidance. The deterministic and probabilistic guidance will be much more automated so the forecasters have time for the IDSS. This evolution will require changes in the skills of operational forecasters, including retaining knowledge of fundamental concepts in meteorology and increasing communication skills. Distilling and describing weather and climate information to audiences without strong science backgrounds will be difficult, especially when so much conflicting and sometimes inaccurate information is readily available. The AMS can assist with this transition through modification of certification requirements and coordination with the university community to ensure that the education system provides the future workforce with the skills needed for operations.

Other technology changes include the advent of unified modeling systems that provide a new mechanism to tie academic researchers with the operational forecast community. The common availability of easy to use machine learning software will also provide ways where multiple disciplines can work together. However, guidance is needed on proper use of these new capabilities. The AMS can continue and expand training and special sessions to provide guidance on the use of this new technology. The migration towards cloud computing and storage will also play a role in making new techniques available.

Finally, many lessons are being learned from the recent and abrupt transition to telework. Even as the current crisis subsides, it is unlikely that the working environment will return to its former state. The AMS will need to adapt to these changes, which may involve a considerable expansion of remote options for scientific interactions.

Mark DeMaria is the Chief of the Technology and Science Branch (TSB) Chief at NOAA’s National Hurricane Center in Miami. The Technology and Science Branch is responsible for application development, transfer of research to operations to improve tropical cyclone and tropical marine forecasts, and support of NHC’s computer infrastructure and data flow.

DeMaria began his career in Meteorology as a faculty member in the Department of Marine and Atmospheric Science at North Carolina State University in 1985, and his career with NOAA in 1987 at its Hurricane Research Division (HRD). During his eight years at HRD he worked on tropical cyclone modeling, data assimilation, and development of statistical models for prediction of hurricane track and intensity. From 1995 to 1998 he served as the NHC TSB Chief, and from 1999-2013 as the Regional and Mesoscale Meteorology Branch Chief at the NESDIS Center for Satellite Applications and Research, collocated with Colorado State University. During this time, he developed satellite applications to tropical cyclone analysis and forecasting, and led the development of NHC’s operational wind speed probability program. DeMaria returned to NHC in 2014, again as the TSB Chief. Since 1981, DeMaria has authored or co-authored more than 90 articles on tropical cyclones, numerical weather prediction, and satellite and mesoscale meteorology in the refereed literature. He received the Banner Miller Award from the American Meteorological Society four times for his work on tropical cyclone forecasting as well as seven NOAA and Department of Commerce Gold, Silver and Bronze Medals. He also received the NOAA Distinguished Career Award in 2014 and the NOAA Administrators Award in 2019.