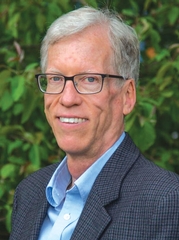 Few Americans see a physician every day, but most of us regularly turn to a broadcast meteorologist, a weather website, and/or a weather app. We are lucky to be part of a field that is not only endlessly fascinating but also carries such a high public profile.

Although I am running for Council as a representative of the private sector, I spent much of my career at a not-for-profit institution (UCAR/NCAR) with deep roots in both the public and academic sectors, so I have a great appreciation for all three. I firmly believe the genius of the AMS community is embodied in its triple strengths—public, private, and academic sectors, all robust. Phenomenal innovations are emerging from the private sector. Many of these rest on a foundation of federally supported science and draw on the flow of data from critical observing platforms.

In many ways, AMS is in its prime, with superb publications and invaluable conferences. At the same time, many AMS members are now feeling or fearing the pinch of reduced support for their work. Just this year, Oklahoma’s state science fair—where I gained my first exposure to AMS as a high school student—lost all of its state funding. This is just one hint of the many challenges facing our own work and American science as a whole, challenges that go well beyond funding. Too many Americans have lost trust in the value of expertise and in the role of science in generating knowledge. As a leader in one of the most accessible and visible sciences, AMS is well positioned to help remedy this distressing situation. I would be honored to work with AMS leaders in maintaining our Society’s many strengths and reaching out to new audiences and partners.

Robert Henson is a weather and climate science writer at Weather Underground (part of The Weather Company, an IBM Business) and coauthor of WU’s Category 6 news site, where he covers breaking weather and climate news and emerging research. From 1990 through 2015, he was a science writer at the National Center for Atmospheric Research and the University Corporation for Atmospheric Research, where he produced many hundreds of articles on UCAR/NCAR research and served as managing editor for several UCAR annual reports, including “UCAR at 40” and “UCAR at 50,” and for the newsletters UCAR Quarterly and UCAR Magazine. While at UCAR, Henson also contributed to a number of public exhibits and helped develop the Walter Orr Roberts Weather Trail, the first weather-oriented nature trail in North America. Henson received his B.A. degree in meteorology and psychology from Rice University and an M.A. in journalism with a focus in meteorology from the University of Oklahoma. He participated in lightning research at the National Severe Storms Laboratory and writes often on severe weather.

Henson’s books include Weather on the Air: A History of Broadcast Meteorology (AMS Books, 2010) and The Thinking Person’s Guide to Climate Change (AMS Books, 2014). In its original form as The Rough Guide to Climate Change, the latter was one of five shortlisted finalists for the United Kingdom’s Royal Society Prize for Science Books, the only major international prize that celebrates science writing for a nontechnical audience. Together with original author C. Donald Ahrens, Henson is also coauthor of the textbooks Meteorology Today, now in its 12th edition, and Essentials of Meteorology, now in its 8th edition. He has produced lay-friendly summaries of National Research Council reports on climate stabilization targets and on Earth science applications from space. As a freelance author, Henson has written for Nature, Scientific American, AIR & SPACE/Smithsonian, Technology Review, American Scientist, and more than 50 other online and print publications.

Henson is a member of the AMS, the National Association of Science Writers, and the Society of Environmental Journalists. He served two terms on the AMS History Committee and is currently chair of the AMS Committee on Environmental Stewardship. He received Outstanding Accomplishment Awards at UCAR for education and outreach in 1997 and 2004.