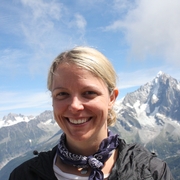 Kim Mueller was the 2011-2012 AMS-UCAR Congressional Science Fellow.  Kim served on the U.S. House of Representatives Natural Resource Committee under the Committee’s previous ranking member, Congressman Edward J. Markey (D-MA) who is now a US Senator.   On the Natural Resource committee, Kim’s portfolio included work in the energy-water-climate nexus, climate safety of hydraulic fracturing, energy exports, carbon pricing, and international climate issues.  As a Fellow, Kim participated in the 17th Conference of the Parties (COP17) to the United Nations Framework Convention on Climate Change (UNFCCC) in Durban, South Africa in December 2011 as part of the US Congressional delegation.

Kim continues to focus on energy and environmental science policy issues.  Kim currently works at the Science, Technology, and Policy Institute (STPI), part of the Institute for Defense Analysis.  STPI is a federally funded research and development center (FFRDC) mandated by Congress whose primary purpose is to provide science policy support to the Office of Science, Technology and Policy (OSTP).

Beyond science policy, Kim also researches the carbon cycle. Much of her scientific research involves budgeting and investigating the behavior of greenhouse gases at different scales using atmospheric observations and statistical models.

Prior to her AAAS fellowship and graduate studies, Kim worked as an environmental engineer in the U.S. and overseas on a diverse range of projects involving flood prediction and management, water system design, and environmental soil and groundwater remediation in the US and Asia Pacific regions. She was selected as an honorable mention by the Detroit Free Press as a “Green Leader” in 2011. Kim earned her PhD, MSE, and BSE in environmental engineering from the University of Michigan.