AMS MOURNS THE LOSS OF ITS PRESIDENT 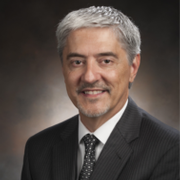 MARCH 17, 2017 - BOSTON, MA - It is with great sadness that the American Meteorological Society announces the passing of AMS President Matthew J. Parker, CCM, who died in his sleep Wednesday night.

Parker, 53, worked at Savannah River National Laboratory in Aiken, South Carolina since 1989, most recently as Senior Fellow Meteorologist in the Atmospheric Technologies Group. He was elected as AMS President-elect in November 2015, and assumed the role of AMS President during the Society’s Annual Meeting in Seattle this past January. Parker was slated to oversee the Annual Meeting in January 2018 in Austin.

“This is an enormous loss not just for the AMS family but for the entire scientific community,” said Keith Seitter, AMS Executive Director. “Matt was deeply admired for his commitment to the AMS community. He was a leader and a friend, and we will all miss him tremendously.”

According to the AMS Constitution, the current President-elect, Dr. Roger Wakimoto, assumes the authorities and responsibilities of president for the remainder of Parker’s term. AMS will provide updates as we have them.

In honor and remembrance of AMS President Matthew J. Parker, the AMS Council and its Executive Committee have established The Matthew J. Parker Travel Fund. Matt's greatest enthusiasm was directed toward students and early career professionals. He was always eager to share his experiences and provide guidance where he could, as well as doing all he could to provide opportunities to engage young members of the community in AMS activities so that they would have the best start possible for their career. In that spirit, the fund will provide travel grants to AMS meetings.

Donations to the fund can be made by mail, phone, or online.

Checks should be made out to AMS and sent to:
The Matthew J. Parker Fund
American Meteorological Society
45 Beacon Street
Boston, MA 02108

If you have any questions, or wish to donate by phone, please contact Stephanie Armstrong at 617-226-3906.